A team from Jackson, with a combined service of 92 years, recently received an EA Excellent Behaviour Award (category: Safety, Health, Environment and Wellbeing) for designing and fabricating an innovative roller system which was used to replace worn out timber groynes at Falkenham Marshes in Suffolk.

The rollers, which were recycled from a skip on another ARPoW site, Manningtree, were modified and used as an innovative method of installing the new greenheart timbers, which posed a manual handling challenge.

The innovation removed the manual handling element in the job, reduced the required workforce, maximised the use of the tidal working windows and avoided the need for heavy plant on the beach, which eliminated the need to survey for unexploded ordnance. This method also removed the risk of slewing plant to the general public, and finally, removed the pollution risk posed by oils and fuels to the nearby conservation areas.

From the outset, the project faced a number of constraints that could have made construction difficult and quite costly:

The site is also very close to the Deben Estuary, a site with almost every conservation designation possible. Careful consideration for pollution was needed (RAMSAR, SSSI, SPA, Marine SPA, AONB).

The site team overcame all these challenges by thinking differently and came up with a solution that saved time, money and resources. 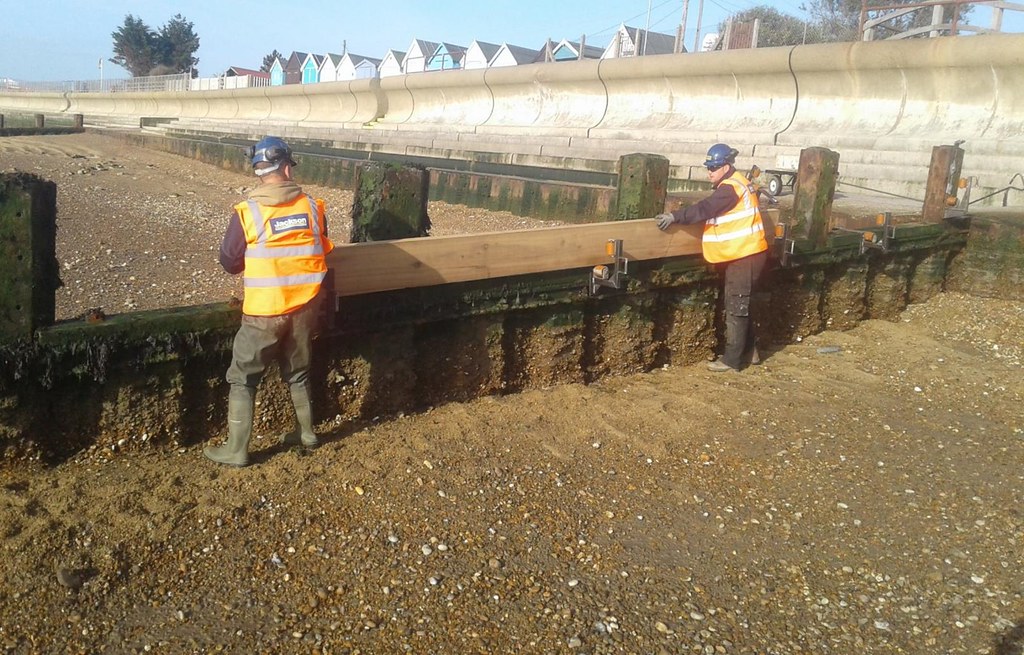 The process
The modified roller brackets allowed the extremely heavy timbers to be installed effortlessly. Using an electric winch attached to a telehandler, the timber was lifted from the footpath, down to the promenade and onto a bespoke turntable trolley. The turntable trolley was then used to swing the heavy timber round and lower it onto the rollers.

The rollers were attached to the existing groyne timbers, which allowed them to be manoeuvred easily into position.

The bespoke adjustable rollers, designed and fabricated by the site team, were bolted onto existing timbers to receive the timber and roll it down the existing groyne. The rollers could also be moved and bolted onto new timber as the groynes were built up.

The benefits
As well as removing the manual handling element, this method also vastly reduced the workforce, from 8 down to 3.

It also maximised the use of working windows between tides as all the equipment could be deployed as soon as tides allowed, and could be removed at the last moment as the tides came in.

Avoiding having heavy plant on the beach also eliminated the need to survey for unexploded ordinance, and removed the pollution risk posed by oils and fuels to the nearby conservation areas.

It also reduced risk to the public and workforce as no slewing plant was used.

Avoiding heavy plant on the beach also eliminated the need to survey for unexploded ordinance.

Lee Dunne, Jackson’s Site Agent said: "This initiative was a huge success that saved time, money and resources. With the help of Jackson’s Senior Design Engineer, Rajesh Chopdekar, we managed to use our in-house expertise to develop the idea, and minimise disruption to the local community in the process."

“The work on replacing timber groynes was a classic example as the location was remote with limited access. Manual handling could have been an issue but was overcome using brackets and rollers attached to the existing groyne posts. A simple solution that needed some thought to develop to a workable conclusion. Ultimately this was team work at its best allowing the scheme to be built without use of large items of plant or utilising marine plant. All completed safely and in a timely fashion.”